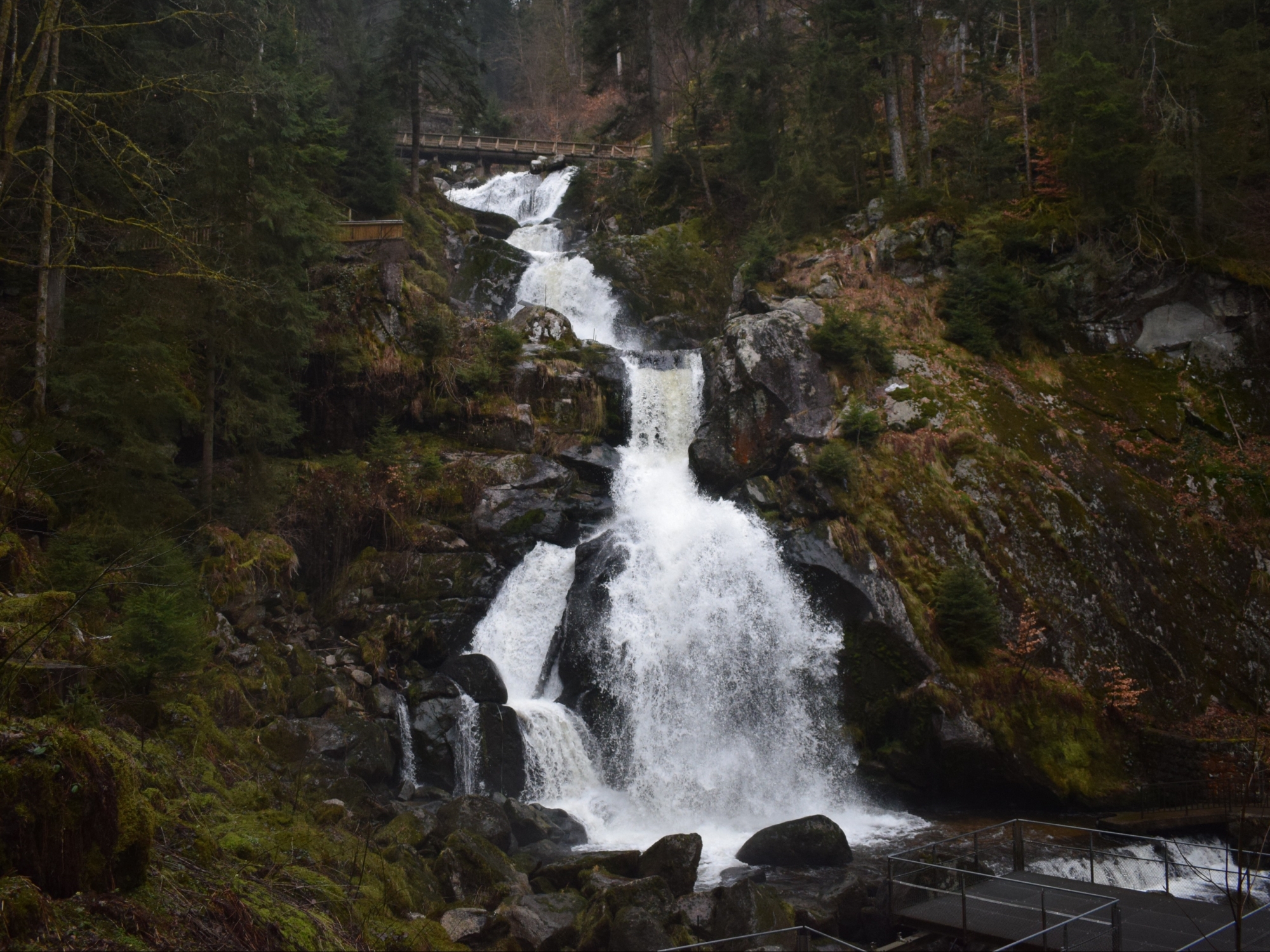 As we explained in this post, last Easter we took profit of Dídac’s stay in Heidelberg to do a short road trip through the beautiful regions of Alsace (France) and the Black Forest (Germany). We had heard lots of good things about the Black Forest (or  Schwarzwald in German) but we hadn’t imagined that we would visit it so soon. We though that the Black Forest was the perfect destination for nature lovers and families and the truth is that our brief visit to that region confirmed our expectations.

We know that the area is full of natural wonders and nice villages, but we needed to focus on one destination to make the most of our time there. Thus, Dídac proposed to spend a night out of his apartment in Heidelberg. The chosen destination was Triberg, one of the most remarkable villages in the Black Forest. We had not heard about Triberg before planning our trip, but as soon as we read the travel guide that Dídac’s cousin lent us we found four powerful reasons to go there.

Triberg waterfall might be the main tourist hotspot in the village. Tickets to the waterfall (yes, you need to pay to visit it, but it is worth it) were included in the price of our hotel, but we got up really early so we could access the waterfall area without need of showing our tickets. Triberg waterfall is one of the highest ones in Germany, with a total height of 163 meters. But not the highest one, as it is usually said. The 163 meters of the Triberg waterfall are far from the 470 meters of the Röthbachfall, located in the Alps, which is the true highest waterfall in Germany. You can read our experience in the Röthbachfall here.

In any case, the Triberg waterfalls are really impressive, specially if you visit them in a rainy season as we did. Surrounded by a forest, the area has been enabled for hikers, so you can just walk and enjoy of the waterfalls from different viewpoints. Since it was so early in the morning, we could do this trek completely alone.

Cuckoo clocks is one of the highlights in the Black Forest. Easy to see anywhere in the region, but difficult to get due to their high price. Quite understandable taking into account their beautiful designs and all the work that is required to manufacture one of those clocks.

In Triberg two clocks compete to be the highest cuckoo clock in the world. One is located in the Eble Uhren-Park. This is officially the biggest one, registered with the Guinness World Records. The inside of this clock can be visited for a low price (€2). You will then enter into a little museum from which you will appreciate the clock’s mechanism and you will be offered a cup of wine.

The second and competitor clock is located in a house in the opposite side of the village, in the territory of Schonach. This clock is placed in the garden of a house and a ticket needs to be bough to access such garden. Alternatively, you can try to spot this clock when driving through the road, as we did.

And don’t forget a visit to the shop called “Haus der 1000 Uhren”, in the main street of Triberg. Prepare your wallet and you will be able to buy thousands of clocks with multiple designs. A big cuckoo clock over the entrance door will welcome you with music and movement each hour.

Food is always a good reason to travel, specially if it’s sweet :). The Black Forest cake is well known all around the world, but it was created in this region. The “Schwarzwälder Kirschtorte” (literally, Black Forest Cherry-torte) is made with chocolate sponge, whipped cream and cherries, while a cherry spirit, called “kirschwasse” is added to the cake to give it its intense flavor.

We couldn’t leave the Black Forest without tasting its traditional cake and thus we planned to visit the Café Schäfer in Triberg, which was highly recommended by our guide since they use the original recipe for the Black Forest cake. We read in our guide that the café opened at 11am so we arrived there after visiting the waterfalls and the biggest cuckoo clock. But we noticed that only the bakery was open, not the café. So we decided to move to the Blindensee for a short trek and return to the café after lunch. A piece of cake and some coffee in this classic café, we couldn’t have had a better dessert.

The Black Forest is full of spots for hikers and nature lovers, but we didn’t have time for a long trek. Dídac discovered that near Triberg there is a photogenic bog lake called Blindensee, located in the territory of Schönwald im Schwarzwald. The lake is part of a natural reserve and is accessible by walking through a boardwalk, which at the time of our visit was covered by snow.

It was really cold, but we kept walking under a light snowfall until we arrived at the lake. It looks really beautiful and is surrounded by high trees. We continued our trek until the adjoining forest. We were amazed in front of those never-ending trees.

We reached Triberg by driving from Alsace but when we left back to Heidelberg we drove through one of the most beautiful roads in the area, the Black Forest Panoramic Road, until the spa town of Baden-Baden. A good way to say “see you soon” (and not “goodbye”!) to the Black Forest.

8 thoughts on “Triberg, water and clocks in the Black Forest”