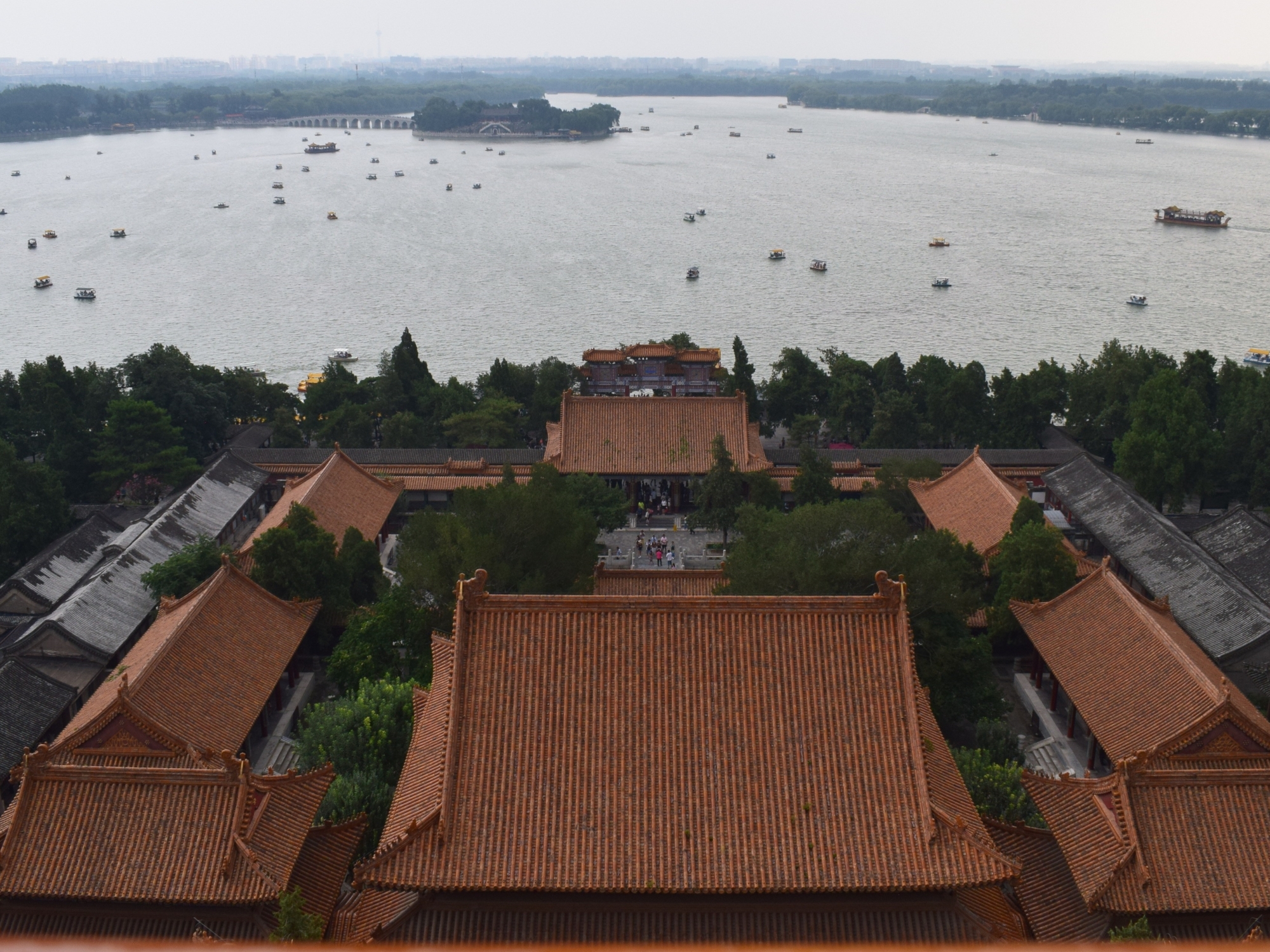 It was our fist day in Beijing. We landed at the city at around 4 a.m. without having slept much during the flight. We took the train and later the underground to our hotel, completed the check-in and bought some breakfast at a FamiliyMart. Our bodies needed coffee and something sweet to deal with jet lag in our first day in China. We had a plan for it but trips are not always as we expect them to be, so we had to improvise a little bit.

As we already explained in this post, after crossing the security check that is required to enter the Tiananmen Square, we arrived at the sale office to purchase the tickets to the Forbidden City. However, we were told that all tickets for that day were sold out. We were tired and a bit disappointed: our trip to China had not started well. It was a very hot day but anyway we decided to anticipate our visit to the Summer Palace and now we can say that it really exceded our expectations.

The Summer Palace is a beautiful ensemble of lakes, gardens and palaces that offers a good contrast with the crowds and buildings of Beijing. Formerly, during Qing Dynasty, it was an imperial garden. The epicentre of the Summer Palace complex is the Kunming Lake, which was entirely man-made (it seems that the excavated soil was used to build the Longevity Hill). The hill is 60 metres high and has many buildings positioned in sequence. When visiting the Summer Palace, be prepared to walk, since it covers 2.9 square kilometres which have rightfully been included in the UNESCO World Heritage List.

We entered the Summer Palace via the northern gate (coming from the underground station of Beigongmen) and stopped in a food stall to buy some lunch. Later, we crossed the bridge over Suzhou Street and saw the Four Great Regions clasping to the hillside. The Four Great Regions is a series of temples inspired by the whites and reds of the Tibetan architecture. We continued climbing up to the Sea of Wisdom, which has a glazed green and yellow façade adorned with lots of little buddhas.

The Sea of Wisdom is the highest building in the Summer Palace. Once there, we deviated towards the Kunmig Lake and we started to walk through the Long Corridor, whose ceiling is adorned with over 14,000 paintings. The Long Corridor is 728 metres long and was built in 1750 by the Quianlong Empreror to allow his mother to take strolls regardless of the weather and we must say that we have also taken profit of that! A slight summer rain surprised us during our visit…

Finally, we arrived at the Marble Boat, built in 1755 and restored in 1893 on the orders of Empress Cixi, with money that should have gone towards building ships for the Chinese Navy (real ships, I mean…).

We then decided to take a ship ride until the South Lake Island (or Nanhu Island) where we had the best views of the Kunming Lake landscape. Afterwards, we crossed the famous Seventeen-Arch Bridge back to the mainland. At that point we were exhausted (you know, jet lag was still there) so we decided to stop for some drinks in a small bar before continuing our walk towards the feet of the Longevity Hill.

We then climbed the south side of the hill towards the breathtaking Tower of Buddhist Incense which is the centrepiece of the Summer Palace complex. Its traditional Chinese architecture contrasts with the Tibetan architecture of the Four Great Regions. Two sides of the same hill but completely different. The views from the top of the hill are just amazing. Indeed, the Summer Palace is like a city within the huge city of Beijing and helps you switch off from Beijing’s crazy pace.

Don’t forget to include Summer Palace in your bucket list for Beijing! 🙂

10 thoughts on “Summer Palace, an oasis in Beijing”