We slept in the Four Points by Sheraton in Sandakan after two short flights in the previous day: the first one from the remote jungle of Mulu to Kota Kinabalu, and the second one from KK to Sandakan. This is from west Borneo and Sarawak state to east Borneo and Sabah state of Malaysia. Sandakan is the base for tours going to Sepilok Orangutan Rehabilitation Centre, to Sukau Wildlife Sanctuary and to Turtle island.

We had breakfast in the hotel. A huge and colourful buffet awaited us in the same floor as the swimming pool welcomed us the night before. The Four Points by Sheraton in Sandakan is located in the tallest building of the city in the seafront, just next to the small jetties where all tours depart from. The infinte pool had impressive views of the city and invites you to have a cocktail while refreshing in its waters. The buffet breakfast is the best of all Sabah state, based on the Lonely Planet guide.

After the breakfast a young Filipino man was waiting us in the lobby. He was going to be our guide for the next 24h. He took us to the Crystal Quest jetty where all boats depart towards Turtle island. The journey took around 1h through the turquoise waters of the Sulu Sea.

Turtle island is part of the Sandakan Archipelago, between Borneo (Malaysia) and Philippines. The Archipelago is also known as Turtle Islands although only one, Selingan, is officially known as Turtle island. Selingan is the only island accessible for travelers, the rest keep 100% protected by the rangers. In Selingan only around 40 people per day can go and spent one night in the small cabins of the island chalet. Selingan is so small that you can surround the island by walk, barefoot on the white sand, in less than 10 minutes.

When you arrive to Selingan, the first thing that you notice is the turtle tracks on the sand. All the beach is full of tracks made by the turtles the night before. At this point we wondered if it was really true that so many turtles come every night to lay their eggs in this island. And the answer was just in the next corner. Just in front of the main entrance of the chalet, there is a tv screen with the data of the last 3 days: how many turtles came, how many turtles laid eggs, how many eggs, which kind of turtle… And the days before our arrival between 40 and 80 turtles came every day to lay their eggs.

After checking in we had lunch and then in the afternoon we went for swimming and snorkeling in the waters of the Sulu Sea. Alone in the beach of such a remote island, just behind a coconut tree, 2 monitor lizards, almost as big as Komodo lizards, where digging into the sand. We saw them, they saw us and after some infinite seconds they dissapeared behind the bushes. I took the GoPro and tried to follow them without success.

When I came back, Laura had a surprise face with big opened eyes. She was looking to the hole that those two monitor lizards digged. She told me to come quick and what a unique moment: baby turtles where going out of the nest, previously disturbed by the lizards, and walking on our towel towards the Sulu Sea, they won freedom.

We realized that by frightening the two lizards, we saved the lives of many baby green turtles, which are endangered. Then I went closer to the hole, put my hand in and took 3 more with one single hand. I did it again, and more baby turtles climbed on my hand… I don’t remember how many turtles we freed at that moment. I just laid them on the sand next to the hole and they, alone, started running towards the sea.

Definteley this is one ot the most incredible moments in a lifetime. Being part of such a natural show, alone in the middle of a tropical sea, is just something I could not dream before our travel to Borneo. And of course, I could not stop making videos of this moment, following the baby turtles in their first steps on the sand and in the water. 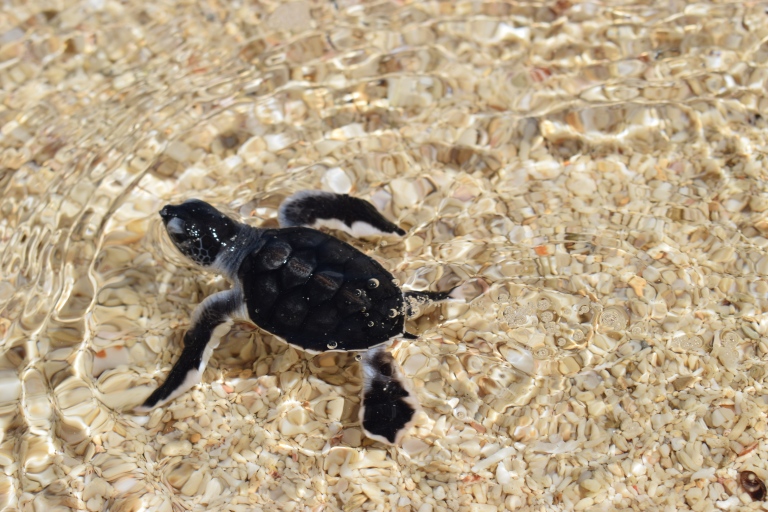 After the baby turtles left, we continued with our plan, and did snorkeling for some hours, discovering the colourful marine life: corals, different kind of fishes, starfishes, … I felt like being in the film “Finding Nemo”, as almost all those species where seen by me in just a single afternoon in Turtle island. No sharks, but I indeed found Nemo!

And at night, after having dinner, the official turtle encounter happens. Rangers are allowed to disturb only one female per night, and all the travelers staying that night in the island went directly where the rangers found one big female laying its eggs. We were sorry to disturb her but at the same time amazed by the experience itself. The ranger took all the eggs, put an identifier to the turtle fin and we left while seeing other big females coming out from the water. This was the second show of the day. A small island surrounded by turtles wanting to lay their eggs, and we, in the island, welcoming them.

Then the eggs are transported to the hatchery in the centre of the island, where the rangers keep them well identified. The baby turtles will be male or female depending on the sand temperature. This is why some artificial nests in the hatchery are under the shadow of trees, and others just under the sun.

We went to our cabin to sleep. We were not allowed to walk at night through the island. It is hilghy prohibited. Only the rangers are allowed to do that while looking for the big females in order to steal the eggs for a greater protection. If you ever travel to Turtle island you will pray for the rangers to miss some nests two months before your stay, for the monitor lizards to not find the nest during two months and for you to put your towel just next to a Turtle nest after a turtle laid the eggs two months before. This way is the only way to have a wild encounter with baby turtles in the beach.

Note: We bought sea friendly sunscreen, which protects coral, turtles and sea life in general before traveling to Borneo. Never touch a turtle if your sunscreen is not made in purpose to protect sea life!