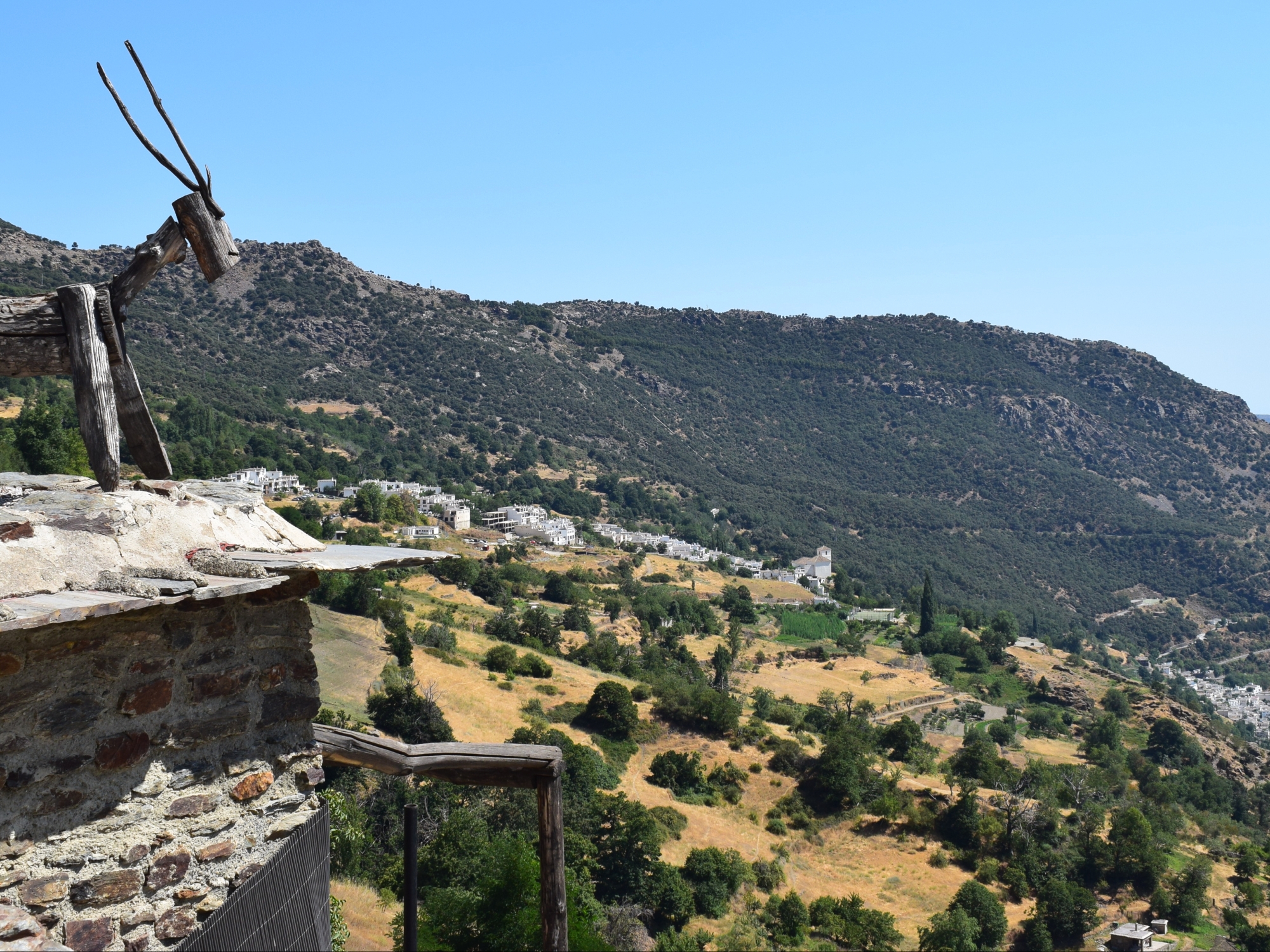 La Alpujara is an Andalusian region located in the southern slope of Sierra Nevada (literally meaning “snowy mountains”), in the Spanish provinces of Granada and Almería. The region is mainly formed by valleys and cliffs that go down from the top of Sierra Nevada. La Alpujarra is home to some of the most beautiful villages in Spain with their white houses and an unusual architecture. Moreover, the region is also interesting due to its gastronomy: honey, cheese, jam and specially the Trevélez cured ham.

A road trip across La Alpujarra is a good idea if you have one or two free days when visiting Granada and its world-famous Alhambra. The villages of LaAlpujarra Alta (the highest area of the region) are all connected among them with a sole road. You just need to drive from Lanjarón to Trevélez to enjoy the most stunning landscapes of La Alpujarra.

As we said, the fist village that you will find when driving from Granada is Lanjarón (around 45 km). This village is really known thanks to its spa and water sources. However, since we only had one day to spend in the area, we decided to pass through Lanjarón and later Órgiva and go directly to Soportújar, a village where witchcraft is really alive.

The name of the village comes from the word “soportal”, which is a covered space in front of the entrance to the houses aimed for pedestrians. Soportújar is said to have been repopulated by Christian families after the expulsion of the Moorish. Apparently, such families came from the northern region of Galicia, a culture in which witchcraft  is deep-rooted. This is the reason why the village is full of witch sculptures and other rare items such as the Dragon Fountain.

Another great initiative of Soportújar is the “time capsule”. It is just a box that contains some objects chosen by the families that live in the village. The capsule was hidden in 2015 and will be opened 50 years later by their offspring. I am sure that the people of Soportújar have prepared a nice gift for their grandchildren.

Pampaneira, Bubión and Capileira are the three villages placed in the Poqueira cliff (Barranco de Poqueira). They are the finest example of La Alpujarra architecture, with their chimneys and the “tinaos”. The “tinaos” are structures made of stone and wood that link streets and houses.

The streets of Pampaneira are steepy and charming. Most of them have small water canals. We strongly recommend that you get lost among the shops of this village, either to buy a traditional carpet or a foodie souvenir. Our days are a bit sweeter thanks to the honey we bought in Pampaneira. 🙂

Although the villages immediately following Pampaneira are Bubión and Capileria, we decided to drive directly towards Trevélez to have lunch there and taste its famous cured ham, which even benefits from a designation of origin. This ham is cured naturally and with a few amount of salt.

The village of Trevélez is bigger than Pampaneira and there are several shops and restaurants. Apart from its ham, what makes Trevélez special is that it is one of the highest villages in Spain (with 1,476 metres high) and the starting point of the trek to reach Mulhacén from the southern slope. With its 3,479 metres high, Mulhacén is the highest peak of the Iberian Peninsula.

After lunch, we drove towards Capileira, but made a quick stop in the fountain called “Fuente Agria” which is known thanks to its medicinal properties. It is placed next to a small church. The water does not taste very good but maybe you can make an effort! 🙂 It seems to contain plenty of iron.

Nearby, you can find the “Chorrerón de Pórtugos”, a waterfall with a height of 20 metres and a reddish colour.

And, finally, we arrived at Capileira, the highest village in the Poqueira cliff. Together with Pampaneira, Capileira has been included in the list of the most beautiful Spanish villages. The houses of Capilera follow the traditional architecture of the area, with “tinaos”, cilindric chimneys topped with slate and flat roofs.

The ending “-eira” in the names of Capileira and Pampaneira is usually found in the Mozarabic language.

La Alpujarra is for sure on of the most impressive regions in Spain and the perfect place to relax yourself after dealing with the crowds in La Alhambra. Not surprisingly, La Alpujarra even has a Tibetan buddhist retreat centre called “O Sel Ling”, which can also be visited.

2 thoughts on “La Alpujarra, the mountains of Granada”