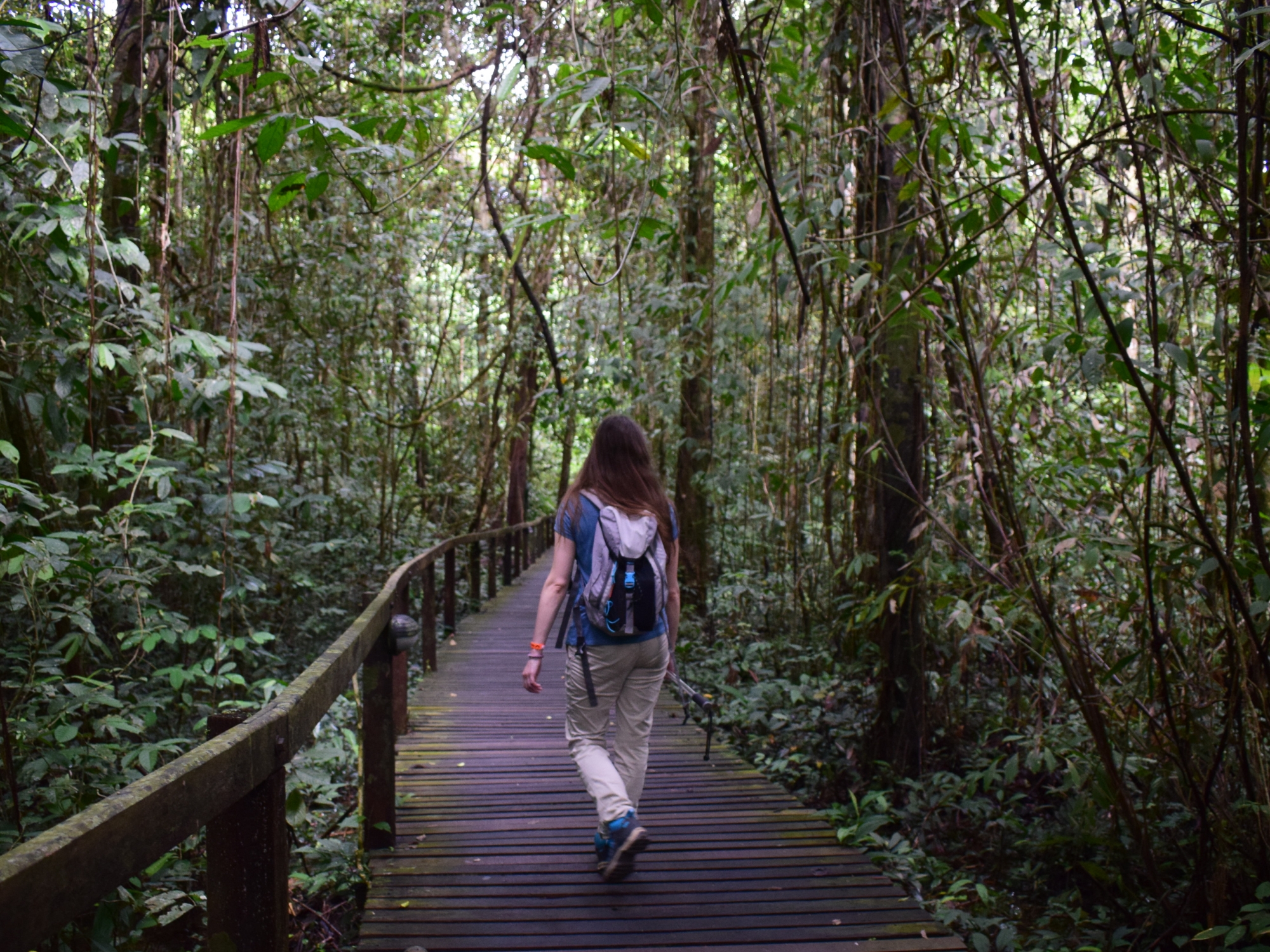 We arrived to Mulu in the early afternoon. As we explained in this post with a video, there were only 6 prople in the flight from Kota Kinabalu to Mulu. The feeling of flying to the unknown, in the middle of the untouched rainforest, was deep enough to wake up all our senses from the very beggining. The landscapes seen from the airplane were so beautiful: jungle and green everywhere since we saw an airstreep just in front of massive cliffs and misty mountains. Mulu was under our feet.

The first thing we noticed when we got out of the plane was the humid environment and heavy heat. We passed through the passport control, got our luggage and did our first step to the unknown. Mulu is not a city, neither a proper village, so the taxi service to our lodge was done by one of the Penan ladies with a 4×4. Just a 5 minutes drive was needed to leave us in front of a hanging bridge.

– Go through the bridge to the other side of the river and turn right after the trees. There you will find the reception.- The lady told us.

We paid her for the service and took our heavy suitcases to the adventure.

By crossing the hanging bridge we entered in the Mulu National Park. The history of how this park was born and the fight that the Penan tribe had against big logging corporations during XX century with the help of one Suiss guy, can be read in the book Finding Eden: a journey to the Heart of Borneo, written by Robin Hanbury-Tenison and considered “… an elegy and a testimony of the folly of greed” as described by Wade Davis. Robin led the exploration in Mulu in the late 70’s, the biggest expedition ever taken place by the Royal Geographical Society and this book explains with all details the difficulties and adventures they had in this expedition. We bought the book, signed by Robin, in the Mulu National Park store and it became the main reading of our travel through the island of Borneo. It is inspirational and gives a good political and historical overview of Borneo and specially Mulu. It allowed us to understand Penan and its nomadic way of life and also the risks they are suffering.

Some adventures written in the book by Robin in his expedition were repeated by us 40 years later, with much more safety, of course, than those men and women that discovered the value of this piece of Earth with the help of the Penan.

In front of the reception there is a small square with big letters stating: Mulu National Park, a World Heritage Site. Indeed, this is a place that all humanity need to protect. If you want to be so fortunate to sleep inside the Park, there is only one option: contact by mail with the Park and ask for accomodation. There are different accomodation options but the most exclusive are those private cabins like the one we had: the Wild Banana cabin.

There are other options outside the Park, before crossing the hanging bridge, for all kind of budgets. The most exclusive and expensive place is the Marriott lodge but there are also places for backpackers close to the entrance of the Park.

The different cabins inside the park are connected by wooden platforms. The reason is that these buildings are built in a flooded jungle. This kind of jungle gets flooded always after a heavy rain. In fact, we discovered it just after leaving the luggage in the cabin and going out for a free walk to the jungle.

There is a free walk in Mulu that everyone can do without special guidance: the Paku Valley Loop. It is an aproximately 8 km path that connects the reception with different caves and interesting points, like waterfalls or bird watching towers. And this was our plan for that first afternoon in Mulu. Due to we were going alone we informed to the park rangers office that we were heading towards the bird watching tower on our own. They gave us the keys and we started walking through the fresh and noisy jungle of Borneo.

There were rivers everywhere and most of the path goes above the ground level through wooden platforms. However, after 30 minutes walking, a sign pointed to the right: Bird watching tower. We left the wooden platform behind and we felt like we were loosing protection. The feeling was like any kind of animal could come and kill us: tarantulas, giant insects, scorpions, crocodiles… Some days later we knew that there were no crocodiles in Mulu, but at that point we were alone in a dark jungle with no way of communicating by phone to anyone and no knowledge about that forest.

Then, suddenly, the path was flooded and there was no bridge or wooden platform. A few inches deep stream was crossing in front of us. We had two options: going back or crossing it. I conviced Laura of crossing and altough we were clean and dry, I knew that was the last moment we would feel like that. Do you remember the video of us crossing an underground river with the water till our head? I took of my boots, took Laura on my arms and crossed the stream barefoot. No insect or any animal bit me. Fantastic!

Then we saw the metal structure. Like being inside a Jurassic Park movie, the structure looked abandoned with rotten metal and old posters explaining the kind of birds that we could oberve from the top. Then, after opening the gate we went up, hoping that no Velociraptor will come in, climb the stairs and eat us.

It didn’t happen. In fact, we didn’t see any bird! Beautiful green everwhere, unknown sounds coming from all directions, but no birds at all! They say that early morning is the best moment to watch them, and the afternoon was not the most appropiate time of the day.

We left the tower, closed the door again, went through the stream barefoot and reached the restaurant next to the reception just before the sunset. A delicious typical Mulu dinner awaited us with nice views of the river before starting a night safari afterwards.

With full stomachs, head torches and anti tropical mosquitos lotion on our skin we started walking behind a young Penan guide to the darkest and blackest world. Let’s say that, if you ever travel to Mulu, you don’t need any protection against mosquitos. There are no mosquitos at all in Mulu! It is the jungle, it is full of water but we didn’t see any mosquito. We were so amazed by this and so confused… However, in the second day we understood it while watching millions of bats leaving the Deer Cave before the sunset.

There was no light from the sky crossing the dense foliage. No moon, no stars, just darkness and the headtorches of the guide, us and 2 more travelers. We saw many different kind of geckos, small frogs, giant snails, stick insects…

We also spotted some hanging geckos above our heads in thin lianas and other strange shaped insects. At some point I was so concentrated looking for wildlife above my head (I was afraid of any falling snake or spider) that I missed the wooden platform and fell outside. Fortunately, there was no water in that point and I could climb again to the platform. The guide explained us many things related to the wildlife in Mulu and once back in the reception we said “See you tomorrow” as he was assigned to guide us towards the Garden of Eden.

2 thoughts on “Day 1 in Mulu: Pristine jungle and night safari”