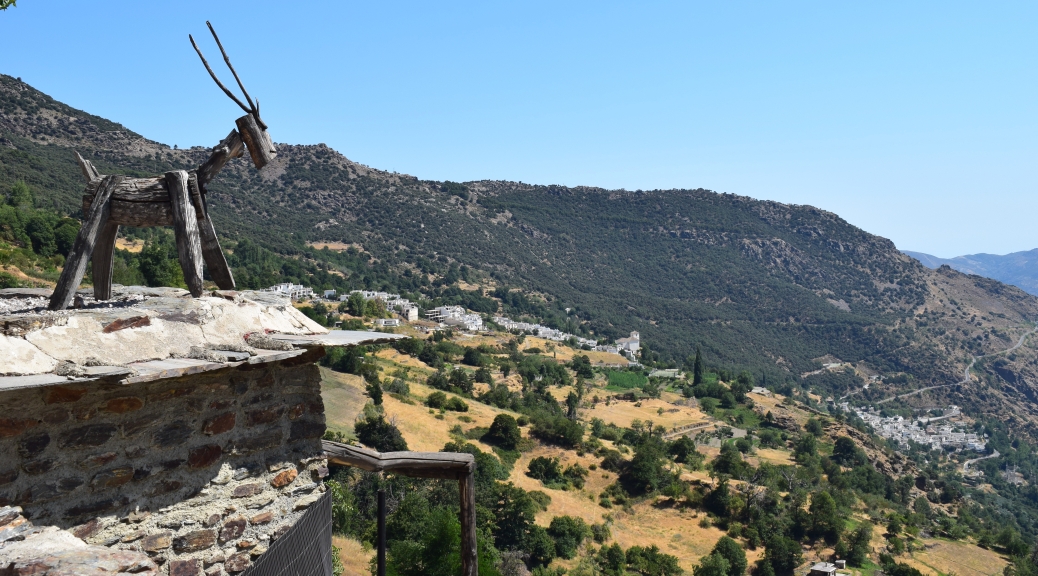 La Alpujara is an Andalusian region located in the southern slope of Sierra Nevada (literally meaning “snowy mountains”), in the Spanish provinces of Granada and Almería. The region is mainly formed by valleys and cliffs that go down from the top of Sierra Nevada. La Alpujarra is home to some of the most beautiful villages in Spain with their white houses and an unusual architecture. Moreover, the region is also interesting due to its gastronomy: honey, cheese, jam and specially the Trevélez cured ham.

A road trip across La Alpujarra is a good idea if you have one or two free days when visiting Granada and its world-famous Alhambra. The villages of LaAlpujarra Alta (the highest area of the region) are all connected among them with a sole road. You just need to drive from Lanjarón to Trevélez to enjoy the most stunning landscapes of La Alpujarra.

END_OF_DOCUMENT_TOKEN_TO_BE_REPLACED

Granada might be the most beautiful city in Spain. Reconquered by the Catholic Kings in 1492, I always imagined a charming city, unique for its Arabic past. But Granada was even better than I dreamed. After years in our wishlist, we finally managed to visit Granada this summer. In August, the city was really hot but we still enjoyed it a lot.

We travelled from Barcelona to Granada by high-speed train and one of our first stops after a long journey was the famous Mirador de San Nicolás – “mirador” means “viewpoint” in Spanish. Although this viewpoint is the most crowded in the city, it is not the only one. The Alhambra is always present wherever you look around. If you want to enjoy the best views of Granada, don’t miss the following sites.

END_OF_DOCUMENT_TOKEN_TO_BE_REPLACED

Hunting experiences around the Globe

Everyone knows what it is. It is, maybe the most imperfect photo of our #travel to #geneva. However, this is the reason that makes it unique. #newyearseve was fantastic and 🥶 in #switzerland. We wish you a 2020 full of travels! #travelblogger #2020 #travelgram #roadtrip #christmas #christmastree
Cold morning in the French #Alps. In our #roadtrip through eastern #France and #switzerland we stopped in Aix-les-Bains to take some photos of the biggest glacier #lake of France. #travel #travelblogger #travelgram #landscape #winter #travelphotography #nature #naturephotography #naturelovers
#Christmas time in #Arbucies, #Montseny, #Catalonia. Nights are magic in small towns in the mountains when Tió comes the 24th of December and gives presents to the children. #travel #night #fumfumfum #MerryChristmas #travelblogger
Day of #shopping and walking around old town of #Barcelona from #Christmas market to Christmas market. If you come these days to our #city, don’t miss the “BCN eye”. Merry Christmas and happy New Year to all! #travel #travelblogger #picoftheday #travelgram
#noescapsecret There is no better way to #discover a country than eating and drinking its products. Yesterday we had a #beer tasting in @matollcervesaartesana. They have different kind of artesan beers and we could taste them together with some cheeses of the nearby countryside. #Catalonia #Lleida #Bellpuig #Belianes #travel #travelblogger #travelgram #drink #eat #food #cheese #cheeselovers #picoftheday #brewery
It’s #cold outside. It’s #warm inside. The perfect moment to taste the #tea we bought in #China. #travel #souvenir #travelblogger #travelgram #autumn #home